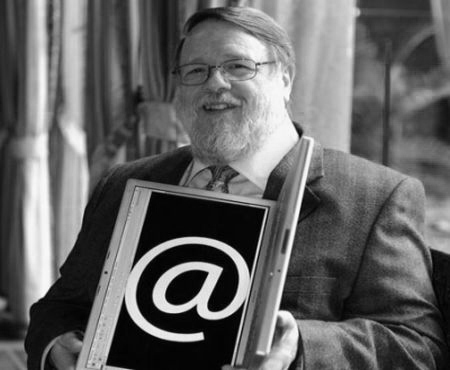 Raymond Samuel Tomlinson was an American computer engineer was born in Amsterdam, New York.  Soon after his birth his family moved to the Broadalbin, New York. Raymond attended Broadalbin Central School. Later he attended Rensselaer Polytechnic Institute (RPI) in Troy, New York where he participated in the co-op program with IBM. He received a Bachelor’s degree in Electrical Engineering from RPI in 1963. After graduation, Raymond entered the Massachusetts Institute of Technology (MIT) to continue his electrical engineering. At MIT, Raymond worked in the Speech Communication Group and developed an analog-digital hybrid speech synthesizer as the subject of his thesis for the master’s degree in Electrical Engineering, which he received in 1965.

In 1971, Ray Tomlinson was a recent MIT graduate was hired to help build the earliest components of Advanced Research Projects Agency Network (ARPANET), the precursor to the internet. Tinkering on his own, he decided to build a networked messaging program. Most computers at the time allowed users to message one another, but back then few computers were networked. There was little reason to send messages across computers. The first email was sent on the ARPANET system and the first person to send an email was Ray Tomlinson. The idea of using a computer to send another person a message was nothing new in 1971. It had been done for years. But there are a couple key reasons why the world considers Ray Tomlinson to be the inventor of email. A lot of the conventions that he put in place in 1971 and his first email are still in place today. At the time; In order to send an email to somebody else on a different computer user needed that person’s name such as Ray and also needed to know what computer they were on. One had to separate these two pieces of information by using the @ symbol. Something that we still use to this day. So what did that very Raymond’s first email say? According to Ray Tomlinson “These test messages were entirely forgettable and I have therefore forgotten them. Most likely the first message was QWERTYIOP or something similar.” Over the next few years world started to see email grow and evolve into what we know today. In 1972 programs that can sort messages and allow users to reply and forward them was developed. On in 1981 ASCII encoding becomes the standard the way of representing text within an email. By 1985 email was becoming commonplace in government and educational institutions. In 1989 the first dial-up internet services started popping up. 1991 the first email was sent from space 1992. File attachments feature was born in 1998.

Tomlinson died at his home in Lincoln, Massachusetts, on March 5, 2016, from a heart attack. He was 74 years old. Before this death he was inducted into the Internet Hall of Fame by the Internet Society (ISOC).